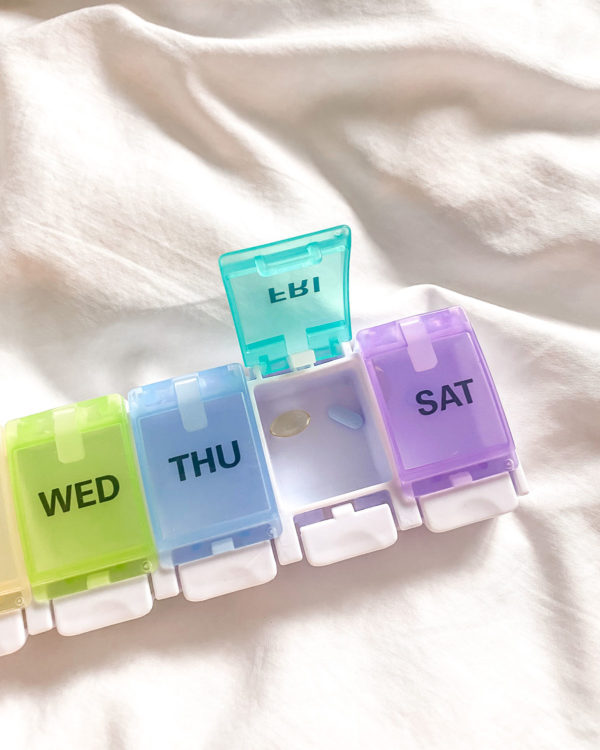 May is Mental Health Awareness Month, which is something that I’m extremely passionate about and something that’s very near and dear to my heart, so I didn’t want to let the month slip away without touching on this subject. A few months ago, I shared how I manage my anxiety, and I mentioned that I started taking medicine to help manage it earlier this year.

I know I’ve mentioned this before, but I’ve had intense anxiety for as long as I can remember. I’ve talked to my mom in the past saying something along the lines of, “Have I always been like this?!” and even something along the lines of “Why didn’t you do something about it?!” when she told me that yes, she poignantly remembers me FREAKING OUT pretty often, usually about tests, schoolwork, etc. She just thought I was a “driven” kid, which I totally get. Mental health conditions do run in my family, but obviously, mental health was not talked about as much back then, especially in a town of 3,000 people in rural Illinois. Which is one reason why I’m so eager to break the stigma!

I’ve seen a therapist a few different times throughout my life, usually spurred by major life events… 16 (car accident), 19 (cheating boyfriend), 22 (my mom’s MS diagnosis, my younger brother having a baby, moving to New York), and then at 27 (parents divorce, ankle injury, friendship turmoil). Each one gave me different tools that I needed at the time to cope with those situations. Yet, I don’t think any of the first three really ever told me that I had anxiety. (Or depression, but we’ll get to that tomorrow.)

For the last three years, I’ve intentionally been seeing a therapist who believes in a more holistic approach. I don’t really know why, but I just didn’t want to take medicine if I could help it. (#stigma) In addition to talking about my feelings on a weekly basis, I’ve quite literally changed my entire life in the last three years… Changed friend groups, changed behaviors, worked to heal my co-dependency, worked on not being a perfectionist, became more self-aware, changed my workload, prioritized self-care, set boundaries, started journaling, meditating, exercising, taking every natural anti-anxiety supplement on the market, you name it. I’ve literally done it all. And it was “enough” until it wasn’t.

This past fall is when I hit a breaking point. And honestly, nothing *that* severe even happened, but I guess I got to the point where I was sick and tired of feeling so fucking defeated. It’s been an intense last 3.5 years, to say the least.

When October rolled around this past fall, I guess a few things had just been building… My living situation once I moved last July, never-ending family shit, a very complex situation with a guy I was seeing last summer, a busy work travel schedule… And by early November, I was hanging on by a thread. I’ll never forget the session where my therapist and I decided it was time to discuss medication. I had very evidently slipped back into a depressive episode. 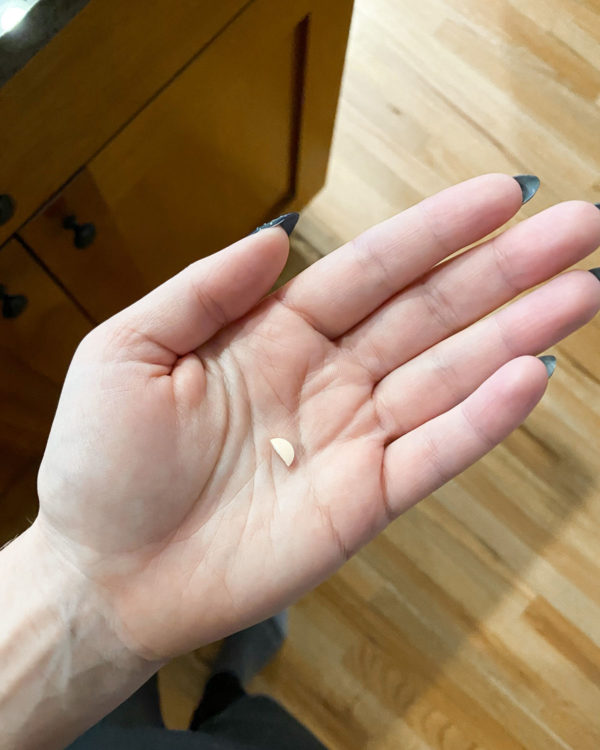 I didn’t actually see a psychiatrist until January 6th, and my first day on meds was January 7th. I know numerous people that have gotten lucky where the first medicine and dosage they tried worked for them, and I guess the eternally optimistic side of me hoped and prayed that I would be the same. But for whatever reason, it seems like I’m always fighting an uphill battle when it comes to mental health situations! 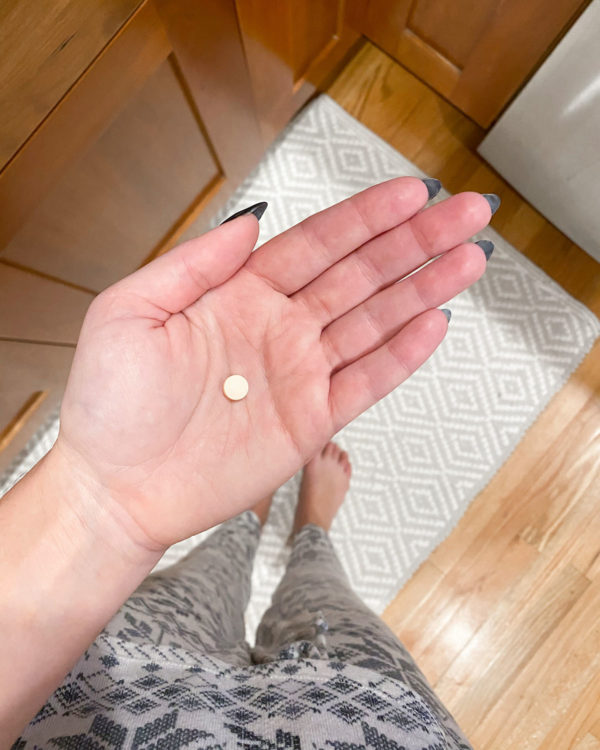 After about a month on that first medication, I felt like I had been tranquilized. I was on the verge of tears in a Lyft on the way to a meeting*, not knowing how I’d be able to carry a conversation. I had already skipped a lunch that day because I couldn’t get myself there… After snoozing my alarm for an hour, I finally got out of bed to take the dog out. While I was brewing coffee, I sat down on the couch and fell asleep for two hours. I finally got myself in the shower, but I kept having to sit down while I was getting ready because I felt so unbelievably fatigued. Part of me wondered if I was somehow pregnant because I felt so exhausted, but I obviously didn’t have the energy to make it to the store to get a test. I seriously felt like I had been drugged, it was so bizarre! I ended up calling my psychiatrist that evening, stopping the medication immediately, and trying a new one a few days later.

*oddly enough, that meeting was with Jill from Cambria. I’ve talked multiple times how that was such a great meeting, and I’ve been able to maintain that relationship with her and their brand, but it just goes to show that you truly never know what someone else is going through. 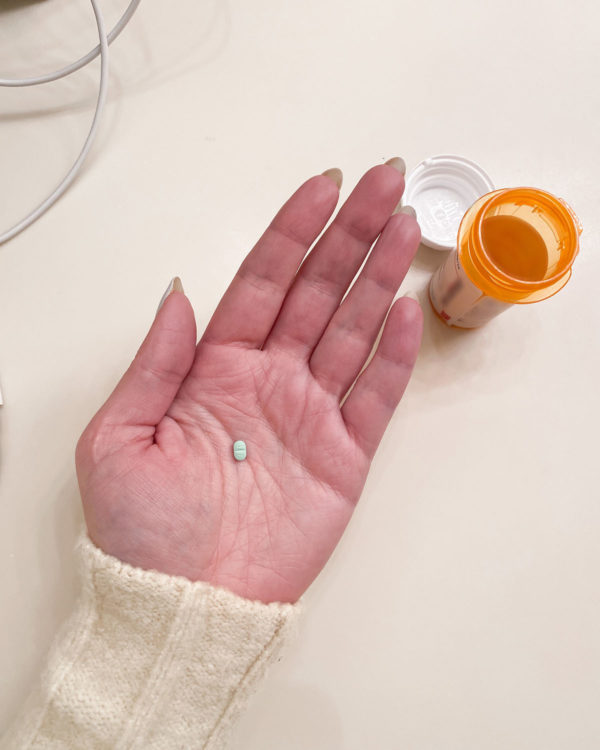 It was a rocky road with different medications and dosages, but I am so thankful to now be on an SSRI medication that works for me. I was so nervous to start a medication in fear of “not feeling like myself,” but in all actuality, I’ve finally felt like myself for the first time… in a very long time.

I’ve gone back and forth about sharing this, but I know that reading other people’s stories of mental health struggles and their positive experiences with medication really helped me feel less alone in the darker days, and made me feel like it was ‘okay’ to have to turn to medicine. Namely, a few friends in Chicago, Julia, and even Kristen Bell. Struggling with anxiety, depression, and needing to take medication is nothing to be ashamed of.

Like Julia did, I thought I would share some of the ways that I’ve felt like a better version of myself these past two months… You know, besides not feeling like I have an elephant sitting on my chest throughout the day!

Work: While I don’t think it’s possible for most self-employed people to not feel some type of work-related anxiety, I no longer feel paralyzed by having a lot on my plate. For the last couple of years, I was in a constant state of crippling anxiety when it came to work… If I’m being honest, it’s astonishing that I got anything done at all. I’ve dropped the ball too many times to count, and I’ve probably ruined more work relationships than I care to admit. But I feel like I’m finally able to concentrate and focus in a way that I wasn’t able to since I was on ADD/ADHD medication in college. (Which unfortunately exacerbated my anxiety!)

Sleep: It used to take me about two hours to fall asleep at night. One hour on a good night, three hours on a bad night. Now, I fall asleep pretty easily within 30 minutes. Of course, there are still nights where thoughts keep me up longer, but I don’t have the influx of racing thoughts as soon as my head hits the pillow at night.

Overall, I just generally feel so much better! I feel lighter and happier. I can’t say that life feels like rainbows and butterflies, because obviously I got my medicine sorted out just as we entered into a global pandemic. But I feel so much lighter overall! I still have bad days. I still have days where I feel stress, and I still have days that I feel a bit of anxiety. (It’s nowhere near the debilitating anxiety that I used to feel on a daily basis!) But I feel more resilient, like I’m able to bounce back quicker, and not let triggers work me up as much.

I actually put together an IGTV video that’s more like an hour-long podcast episode… You can watch it here! (You can watch it via your computer, too, if you prefer to have it on in the background, it doesn’t have to be on the mobile app.) I expand a bit more about choosing to see a psychiatrist, the process of finding a medicine that was right for me, some of my fears about taking medicine, etc.

A New Kind of Masking