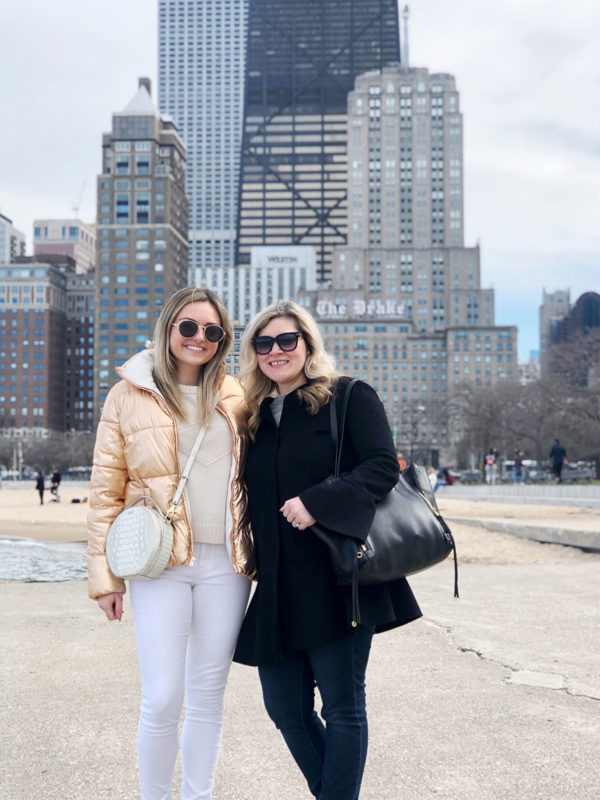 My friend Jackie flew in from New York to visit me this week and it was such a refreshing 36+ hours! She arrived on Monday night, we went out for pizza at Parlor, we chatted on my couch for a few hours on Tuesday morning, we went out to lunch at Somerset, we walked on the lakefront path, we got coffees and leisurely strolled around Restoration Hardware, we did some beauty shopping at Sephora, we grabbed a glass of wine at Hampton Social, went to dinner at Barrio, and stayed up late chatting again last night.

I met Jackie at my first job in New York City in 2012 (back when I ran social for eight beauty and fragrance brands!) and we’ve been friends ever since. Jackie started at the company a few months after I did, just before she got engaged. We used to get lunch together most days, or go to the gym or a workout class after work. (We actually went to our first SoulCycle class together!) We always lived in the same neighborhood so a lot of times we would even car pool (or really, cab pool) to the office together! I sat across from her in our office (she worked on the PR side of things) and got a front-row seat for wedding planning, got to go to her bachelorette out in the Hamptons, went to her and her husband’s wedding, and kept in contact well after we both ended up leaving that job. In fact, my last apartment in New York was literally across the street from her and her husband’s apartment on the Lower East Side before they moved out to the suburbs to start their family. She’s now the mom of the cutest toddler (while working full-time in the city) so to say that the last few days were a total luxury would be a complete understatement!

Jackie visited me here in Chicago a few months after I moved here, and I’ve gotten to see her a number of times in New York when I have been back visiting! But I haven’t been to New York since May of 2017 (longgggg overdue for a trip!) so I hadn’t seen her in almost two years since I got to meet her six-month-old baby.

It’s so crazy because I remember when she visited Chicago the first time, back in October of 2015. I was so stressed about making dinner reservations and making plans because I had only lived here three months and had no idea where to go to show her around! Fast forward to now when I feel so settled here in Chicago and narrowing down the places to take her was no easy feat, haha.

Anyway, I’m actually not writing this post today to talk about friendship, even though I do feel so lucky to have such great friends in my life that have carried on through so many life phases and changes. I’m writing to express what I was thinking about before I fell asleep last night, and why it’s so necessary to take some time away from work and responsibilities to recharge a bit.

I did not work at all yesterday. I mean, I answered some quick emails from my phone at a few points, but I didn’t touch my computer for more than five minutes in the morning. And truth be told, I don’t know the last time that happened, but it definitely hasn’t been in 2019.

When you work for yourself, time is money. I don’t have a steady paycheck, so anytime that I’m not working, I’m thinking about the revenue-generating work I could be doing. Other than a lack of calls and meetings and more plans with friends, weekends can sometimes feel like weekdays. And even when I’m not working, I tend to be thinking about work. Even though I try to take Saturdays off, I always end up doing at least something on my to-do list. And on Sunday nights, I usually end up logging a solid six or seven hours on the computer in the afternoon/evening to get set up for the week.

I’m in no way trying to complain about working weekends, but just exemplifying that I really never take a full day off, and especially not during the week. But on Sunday and Monday, I made sure to work ahead so I could devote my full attention to hanging out with Jackie on Tuesday since she was taking time away from her family to fly here and spend time with me! And by the time I went to bed last night, even though she had only been here a little over 24 hours, I felt so recharged. And Jackie said the same thing! She hadn’t had a leisurely day like that, without a plan or places to be, in far too long.

It was so nice to catch up with a longtime friend that I hadn’t seen in a while. It was so nice to spend a beautiful day out walking around. It was so nice to have my phone put away at meals and not be looking down at it while I’m walking. It was so fun to chat about old times, how much has changed, and just like the good ol’ days, talk extensively about all things beauty products, too. (She’s worked in beauty her whole career!)

And here we are, I’m back to regular working hours on Wednesday morning, sitting at my computer, and the world is still spinning! Funny how that works, isn’t it?

So if you also fall into the trap of feeling guilty for taking time away from your work or away from your family, try to remember that it’s okay to take a beat for yourself sometimes. Sure, flying across the US to see one of your girlfriends might not be as easy to coordinate, but it’s okay to carve out some time to step away from life’s responsibilities and recharge your batteries from time to time. We’re all better for it!

No images found!
Try some other hashtag or username