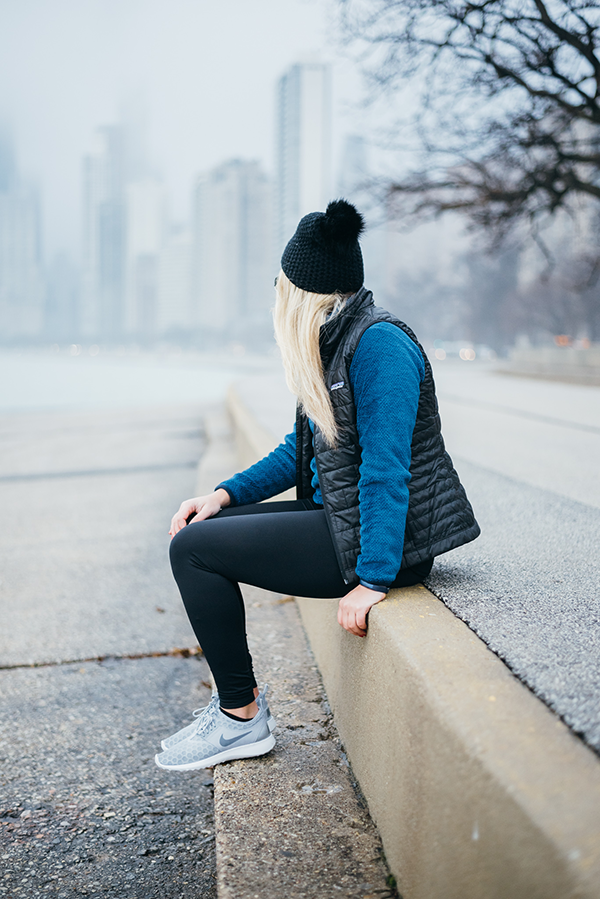 I was scrolling through Instagram tonight and saw that today was apparently World Mental Health Day. (If you’re reading this post on Thursday, I’m writing this post on Wednesday night and referring to the 10th!) There’s a day for everything these days, but this one is one that I can definitely get behind, as mental health is a topic I’m so passionate about, but have a hard time figuring out how to talk about it, get more involved with, etc.

Anxiety is something I’ve struggled with for as long as I can remember, with bouts of depression, too. I’ve gone to therapy on and off since I was 16 and it’s one of the best things I’ve ever done for myself. (I asked my mom if I could start seeing a therapist when I was a junior in high school… Literally no clue where I got that idea.) I saw another one for a summer during college. Another before I moved to New York. And my current therapist ever since I found out my parent’s were separating in December of 2016. As I’ve grown older, much of my adult life has been dedicated to keeping my mental health in check, especially these last few years. I try to talk about therapy and anxiety as openly as I can because the less “taboo” these terms and topics sound, the more we can break the stigma around mental health.

Fun fact and a little side story… I never took a psychology class in high school or college, and I really wonder if my life would have taken a different direction if I had. I am so fascinated by the mind, and if I didn’t have an aversion to going back to school, I would most definitely try to become a therapist. In fact, when I first sat down with my assistant, Cody, she told me she was getting her masters in Psychology to become a therapist and instantly in my head, I was pretty much like, WELP, YOU’RE HIRED. (Just go ahead and picture what a work day is like with us two… 😂 Deep thoughts and intense conversations for dayyyss, haha.)

Anyway, I’ve gotten so in tune with myself the last few years that I can usually pin-point the problem(s) I’m facing with ease. I can usually figure out what’s *really* bothering me.. You know, that beneath-the-surface shit that likes to rear it’s ugly head. (And when I can’t, my therapist can.) And a lot of the times, I can hear what my therapist is going to say before she has to say it. I’ve been doing the work, as they say. I usually know exactly what to do when I feel down. I know how to pull myself back up. I can stop the spirals before they happen. I know my triggers. I’ve gotten pretty good at living with my anxiety and melancholic moods. Not every day is a good day (far from it), but I’m usually self-aware enough to pin-point the problem and start working through it.

… Which is why the last week and a half has been such a fucking struggle. I don’t know what’s wrong, but something’s definitely off. I waxed poetically on a Friday morning about how amazing my first month away had been, and by Monday, I felt the polar opposite of those warm and fuzzy feelings.

On that Saturday, it was quite the long travel day to Medellin from Lima. One of my flights got cancelled, my next flight got delayed, and it ended up being a 14 hour travel day door-to-door that was exacerbated by the whole “moving”-to-a-new-country thing. I didn’t have a chance to get settled once I got to my apartment in Colombia, I quickly unpacked a dress to put on and met some friends at a nearby taqueria for dinner, which turned into drinks and a night out. I went home “earlier” than the rest of the group, around 2:30 or 3am. I woke up feeling like DEATH on Sunday… I thought I had world’s worst hangover even though I didn’t feel like I had drank enough to warrant it. Turns out, I think I had a little bit of a stomach bug mixed with a hangover, mixed with just general exhaustion. (I had really pushed myself to do *all of the things* that last week in Lima and was purposefully skimping on sleep to be able to fit it all in. No bueno.) From Sunday afternoon to Monday morning, I was horizontal in my bed for close to 20 hours. I felt a little bit better by Monday afternoon and was anxious to get the week started, even if it wasn’t the most ideal start to a Monday. Onwards and upwards!

But that’s when things started to get interesting… This is probably TMI, but I thought I was just PMS’ing on Tuesday of last week. And then again on Wednesday. And on Thursday, I thought maybe I was just hangry from trying out Intermittent Fasting that week. And by Friday when I was *still* feeling like I was in a funk, I started to wonder what the fuck was going on.

You see, I was pulling out all of the tricks in my toolbox. I joined an amazing gym here in Medellin and have (still) been working out almost daily, which is usually a sure-fire way to kick my stress and anxiety in the ass. I’ve been going to spin classes at the gym and it’s felt so good to get back in the saddle, so to speak. I’ve gone to a handful of morning yoga classes outside on the deck at Selina (our co-working space this month). The deck is right above a flowing stream and the sound of rushing water is the most serene way to start your day! I’ve meditated more in the last 12 days than I did the entire last month in Lima. I got a massage. (And it was friggen amazing.) I spent a lot of time outdoors. I’ve vented to my closest girlfriend here in my group. I’ve FaceTimed with my besties in Chicago a few times. I’ve gotten lost in a book. I’ve had wine. I’ve gone to dinner alone and had the most incredible time. I’ve eaten pizza. I’ve found cute new cafes to work at. I even went shopping. I’ve done face masks. I’ve lit a candle. I’ve cooked. I’ve journaled. I’ve done breathing exercises. Self Care? Check, check, and check. I’ve done everything I can think to do. And yet, instead of feeling better each day, I almost feel worse. (It pains me to even admit that.) Most of these things (or a combination of a few) can almost always turn any day or week around, but for whatever reason, it’s all barely moving the needle. And not being able to fix the situation is making me increasingly more and more frustrated. I hate feeling like this and I want nothing more than to just kick this mood once and for all. And I feel like I can’t, which makes it even worse. And the vicious cycle continues.

Sometimes I struggle with sharing posts like this because I don’t have an answer… I don’t have an ending to the story. I don’t always have the words to tie a life lesson into a pretty little bow. I always fear that if I leave you without a positive ending or something to take away, it will seem like I’m complaining or ungrateful or something else just as bad. So I usually end up staying silent and keeping feelings like this off of the blog in order to keep it an upbeat, uplifting space. I tend to wait to share until I’ve learned the lesson, enough time has passed, or I have something a bit more profound to say.

But then I thought about breaking the stigma around mental health… And how, just like you, I constantly have to remind myself not to play the comparison game. And how I have to be cognizant about remembering that Instagram is just a highlight reel, even as I’m posting my very own highlight reel. So I’m leaving this here… undone and messy.

I don’t know what’s wrong, I really don’t. I have a lot of little theories, none of which individually warrant the way that I’m feeling. If I had to guess, I think it might just be the perfect storm. The longest trip I’ve ever taken (at one time) was somewhere around 5 weeks, which is right where I’m at right now. I miss my best friends and my family, too. I miss Chicago and my apartment and all-things-fall. I’m going through so many personal and professional adjustments all at once— living with roommates, working in an office, having another job besides my blog, having a manager, working with a team, living in a foreign country where I don’t speak the language* (I’m still taking Spanish classes twice a week and practicing as much as I can! I’ve made lots of strides, but it can still be really frustrating at times), etc.

There’s the whole change aspect, too… Do I just not handle change that well? It took me a week or two to get settled in Lima before I felt like I found my stride. And as soon as I found it, it was up and on to the next city, you know?

And then there’s the whole safety element, which I’m working on a whole different blog post about. Twenty-ish years ago, Medellin used to be the most dangerous city in the world. And while it’s perfectly safe today, there are still some necessary precautions that need to be taken when you’re out and about here in Colombia. (Just as you would in another other country, to be honest.) But I was basically on HIGH ALERT for the first week that I was here… to a fault. I felt irrationally unsafe, without much of a reason. Thankfully, I’ve gotten a lot more relaxed (while still being cautious), but I was really in my own head our first week here.

Like I said… I don’t really know what’s wrong. And if I had to guess the “lesson” here, or what the Universe is trying to teach me or tell me right now, I would guess it’s probably something along the lines of it’s okay to not be okay. As much as I always wish I could quickly do the work, fix the problem, and race to the other side of the challenge I’m facing, sometimes the storm likes to stall overhead for a bit instead of passing right on by.

I was going to leave it there, but wow — I really can’t make this up. As luck would have it, I just opened up Instagram to see this quote posted by one of the other girls in my Remote Year group, and it’s the perfect note to end on…

Be whatever you are right now. No more hiding. You are worthy, always.”
-S.C Lourie