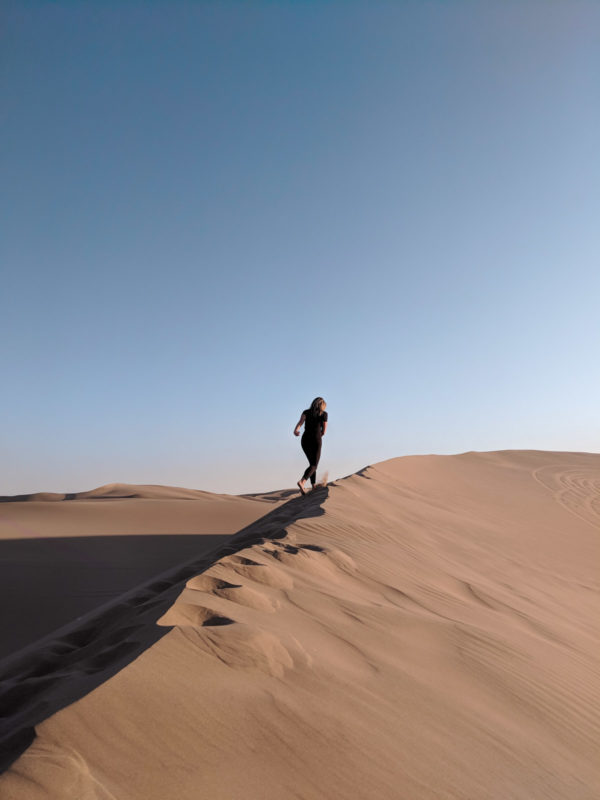 I’ve spent one month in Peru and I’m now one month into Remote Year… It’s only been thirty days (a few less, actually) and I truly can’t imagine my life without these past few weeks in it. I’m writing this post on a Friday morning from my favorite cafe in Lima (El Pan de la Chola in San Isidro), with less than 24 hours until we get picked up to go to the airport to fly to Colombia. I woke up this past Monday feeling allllllll of the feels… I was so nostalgic about us Kahlitos only having one work week to squeeze in everything on our Lima bucket lists. And I may or may not have teared up in my Monday meeting with my manager… I feel so unbelievably grateful that I’ve gotten to make this dream of doing Remote Year a reality. And I doubt I’ll ever be able to put my appreciation for these experiences into words that do it justice.

This week alone, I’ve done it all. I’ve gone surfing off the coast of Lima with my friends before work. (And ran barefoot down the side of the highway as a “warm up,” but that’s a story for a different day… Our surf instructor was kind of crazy, haha.) I’ve also face-planted into the Pacific more times than I can count. I’ve learned to salsa dance, drank my fair share of Pisco, and taken a few tequila shots, too. (And bonded with Ally, one of my Lima roomies, over our love for espresso martinis.) I’ve laughed until I’ve cried too many times to count with my other roommate, Arielle. I’ve woken up early (before my alarm has even gone off!), eager to seize the day. I’ve gone to a goal-setting seminar and put a plan on paper for Q4. I’ve gone to Spanish class. I’ve skipped a Spanish class, too, in favor of going to the Mate Museum in Barranco instead. (And I’m so glad that I did — the museum is a must-visit!) I tried to order my favorite Arroz Norteno at Agallas in Mercado 28 three different times… Third time was finally the charm! I’ve gotten a crepe at cutest little cafe, and I’ve caught up with friends from Chicago. I’ve found a new store that I love in San Isidro and didn’t buy the little handbag I wanted in favor of saving space in my suitcase. I’ve taken too many photos to count. I’ve spotted my ‘Barranco Bae’ one last time and kicked myself for not saying hi when I had the chance the week before. I filmed a fun video with my friend, Dan, featuring some of my favorite spots in Lima. I celebrated a new friend’s birthday over delicious Mexican food at and spicy palomas at Frida Cocina, which oddly made me feel right at home.

On Wednesday night, we had our Town Hall meeting, where we reminisced about the last month and planned for our next. We shared some of our funniest memories and talked about the people that inspired us, too. We learned all about Remote Year Citizenship (and all of it’s perks once we’ve completed our program) and I couldn’t help but leave the meeting feeling so full of light and love. I’m surrounded by so many amazing people and a part of such a cool community, and it’s something special, that’s for sure.

Oh, and I’ve gotten a good amount of work done, too.

Alex, one of my guy friends from Chicago, was in town on Wednesday night after our Town Hall and that’s when it hit me (again) how in-effing-credible this month has been. I honestly didn’t have one bad thing to say about the last few weeks! Sure, this month has come with it’s fair share of challenges, but I wouldn’t trade it for anything. We chatted all things Lima (he’s been coming here for work for a few years now), Remote Year, Peru, pisco, Colombia, Cartegena, and food, too… A lot of conversations here in Lima revolve around the food. If you’re a foodie, you’ve got to add Lima to your list of places to visit. It’s unreal, trust me.

And that was just this week. This month? Wow, where do I even begin… I’ve seen Machu Picchu in the Andes and hiked back down the mountain to Aguas Calientes. I’ve jumped into a cold plunge pool and relaxed in a natural hot spring (with a pisco sour in hand). I’ve ran uphill in Cusco (at 11.5k feet above sea level) at 4 o’clock in the morning because I forgot my train ticket to get to Machu Picchu and wondered for hours if my lungs would ever recover. I’ve met 25 people that I know I’ll never forget. I’ve eaten more food than I ever have before and have definitely put a few pounds that we’ll call the Lima Lbs. (I’ve reallyyy got to get back on the workout wagon in Medellin.) No but seriously, I’ve eaten some of my favorite meals everrrrr… Lima is a foodie’s dream. I participated in our Positive Impact day here in Lima and dug up old sod and laid down new turf for a children’s playground at Inspira. I’ve gotten to see two beautiful sunsets over the water here in Lima, and I can’t imagine how incredible it is to be here in their summertime versus in their current winter season. I’ve toured the Historical District on a photography walk. I’ve checked out the Country Club Hotel, as well as the Belmond in Miraflores. I had the most insane pancakes at Sibaris. I went to a butterfly bar… Yes, a bar filled with butterflies. I’ve gone live on the Remote Year Instagram and it went so well that we’re making it a weekly thing. I’ve gone to a Rosh Hashannah dinner and learned so much more about the Jewish culture from Becca and Dan. I’ve watched Ray turn a concert into karaoke. I’ve essentially stalked a crush at the Comunal Coworking office in Barranco. I’ve Facetimed with my besties back in Chicago, and my brother and sister-in-law, too. I survived five days without heat or hot water in Cusco. I’ve watched an alpaca fashion show on a train through the Sacred Valley. I’ve also watched someone bite right into a guinea pig and somehow didn’t throw up. I’ve consumed my fair share of ceviche and learned that churros on the street are never as good as they look. (You gotta get that shit when it’s warm, trust me, I tried three different times.) I adjusted to the altitude in Cusco with ample amounts of Coca Tea. I found a Dr. Pepper can with the cutest llamas on it. I went dune buggy-ing and sand boarding in Huacachina, and did a few cartwheels for the ‘gram, too. I watched the sun set over a dessert oasis, ate Chinese food at a gas station restaurant, and got empanadas off a roadside stop on the highway. I learned so much about the Peruvian culture, and I’ve realized that one month is not enough time to see and do it all when you’re having to balance work with play.

There’s so much more I want to see and do in Peru, but I’m excited to take on a new city with my new friends, or tramily as we call it here in Remote Year. (Tramily = Travel Family)

But here I am, one month in… And I’m honestly shocked by my thoughts and feelings of “Holy shit, I can’t believe I only have three months of this left.” I’m nowhere near ready to come home, and to be honest, I’m not quite sure I’ll be ready to go home come December, either. But we’ll see how the rest of the year goes! As I’ve found out first hand this September, everything can shift in just one month.

What I Packed for Remote Year