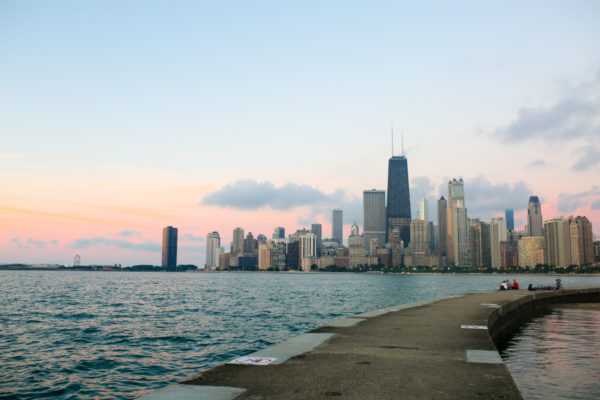 I can’t believe how fast July has snuck up on us. As this weekend nears, I can’t help but think of my moving anniversaries and I’ve found myself getting sentimental more than once over the past few days. I moved to New York over Fourth of July weekend in 2012 and this Saturday also marks my two year anniversary living in Chicago. Where the heck does the time go? On one hand, it’s absolutely mind-blowing to think of how much has changed and how much life has been lived in these past two years in Chicago. (Launching a clothing line, friendships changing, family dynamics changing, friends getting engaged, friends and family having babies, some of the most fun and insane stories that I’ll never forget, getting ghosted by guys, me doing the ghosting, too, I could go on for days.) But on the other hand, I really can’t believe two years have gone by. I keep finding myself saying I moved here “last summer,” and have to catch myself and remind myself it was actually two summers ago. Doesn’t that seem like a long freaking time?!

I mean, I still remember so many specifics about the day I moved to Chicago… Walking through Central Park *sobbing* before I had to go to the airport… It being a mere 60 degrees on July 1st when I landed in Chicago… Getting to see my apartment for the first time… Shopping at Potash for cleaning supplies and picking up a two-pack of paper towels and Ellen saying, “You have storage closets now, babe. You can get the big pack.” Lauren visiting that weekend and us trying to share an air mattress using my turkish towels as blankets. (We ended up getting a room at the Drake the next night instead, haha!) My furniture getting delivered a few weeks later… Going on my first few dates in the city… My 26th birthday… I literally remember everything like it was yesterday. What I wore, how I felt, where I went, etc. Those first few months were pretty fun! It was a whirlwind getting to experience a new city, meet new friends, make new memories, decorate my apartment, and find a new normal.

But for a lot of reasons I’ll spare you, I kind of started to hate Chicago after a few months. I missed New York, but didn’t know if I could see myself moving back. I thought about moving to Dallas for a hot second. Obviously Paris has always been in the running, too. Basically, I just longed to be anywhere but Chicago. And if you’ve been following along for a while now, you can probably see that’s when I really started to ramp up my traveling. No exaggerating necessary, I was actually gone more days than I was home in Chicago in 2016. (Maybe that’s why it doesn’t feel like two years… haha!) I didn’t like being here so I just chose not to be…. Month-long trips became the new norm. And then I got back from Asia right before Thanksgiving and everything kind of came crashing down. There was a whole lot of personal shit that I’m not ready to chat about just yet, but I was already so burnt out from traveling, was trying to gear up for the holiday season (one of the busiest in the blogging world), and on top of all of that, shit basically hit the fan in every single facet of my personal life. Oh, and I stress -fractured my ankle and was in a walking boot for ten weeks. It was a fucked up few months, to say the least.

But one day, I just kind of saw the light. In the midst of what felt like rock bottom, I realized that if I didn’t like something, I was the one that needed to change it. I realized that jetting off for a month at a time was essentially me running away from dealing with shit. (Well, it was and it wasn’t. Obviously those were once-in-a-lifetime trips that I wouldn’t change for anything. I have a flexible work situation that allows me to travel, which I do want to take advantage of while I’m able to do so so freely. But still, there was some element of escapism in there, too.)

I also realized that I had been playing the victim ever since I moved to Chicago… (If you’re new around here, I randomly got evicted from my last apartment in NYC. You can read about that here. That post still makes me cry every time I read it.) I think since I definitely left New York before I “was ready” to leave, I was constantly comparing the two cities. Anything that would piss me off about living in Chicago, I would always think “This would have never happened in New York,” “This was never the case in NYC,” etc. Like, no effing wonder I didn’t like it here. I wasn’t even giving it a chance!

After a lot of soul-searching, I realized that while there were things I didn’t love about Chicago, what I actually disliked was how I didn’t feel like “myself” here. And to be totally honest, I kind of felt like I didn’t even know who that was. I had experienced so many things (both good and bad) that I sure as heck wasn’t the exact same person who moved here “last summer.”

One day over the winter, I just kind of sat myself down and was like, “You’ve got at least six more months until your lease is up. What don’t you like? What’s bothering you deep down? And how can we fix it, at least for the time being? If you want to move when your lease is up this summer, you can, but you’ve got to get your shit together until then.”

Basically, I made a laundry list of what I wanted to work on… What I liked, what I didn’t, what needed to change, what could stay, etc. I had to put myself in a lot of uncomfortable situations, had to set a shit-ton of boundaries, and had to start re-writing the narrative that I was telling myself. A simple change in your mindset can change everything. Sometimes you’ve just got to flip the script, you know?

I essentially just had to cut out all the bullshit and start back at square one with creating a life that felt more like “me.” And when you start putting that new shit into the universe, it’s wild how you’ll start attracting that right back in return. It works both ways!

It’s absolutely, positively C-R-A-Z-Y how different the last four months have been. But I can honestly now say that I’ve really started to like living in Chicago, and it’s not because of anyone specifically or anything other than a simple shift in my perspective. I appreciate Chicago for what it is (livable, clean, less expensive, slower-paced), and don’t judge it for what it’s not (New York). I hope you can see the takeaway here and how it applies to much more than a city… Your happiness depends on your mindset, plain and simple. If you’re focused on the negatives, that’s all you’re going to see.

While I had intended on spending two months in Europe this summer, I decided to stay here instead and enjoy the season that Chicago does so well. I re-signed my lease and I’ve essentially cleared my schedule for the next eight weeks. Until mid-August when I go to Croatia, I’ll only be getting on a plane to go to a friend’s wedding in July. I see places on Instagram and get the worst FOMO and I’ve had to turn down a lot of work trips, which isn’t fun, but I know it’s in my best interest to stay put for a little bit and spend some time with the place I happily call home. So let’s see what happens in year three, Chitown… Shall we?