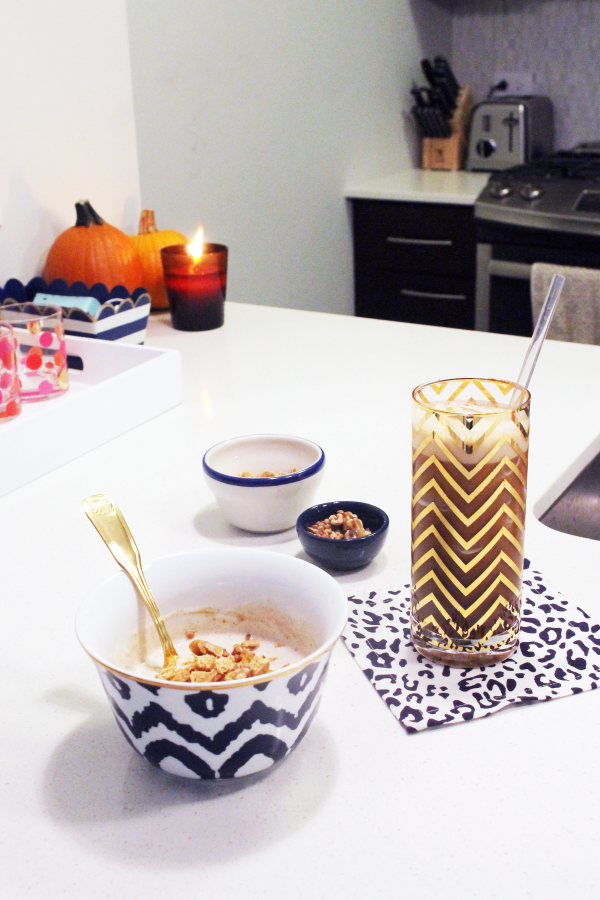 I’ve mentioned this a bit before, but living in New York created some pretty unsustainable habits. Ordering in food is probably the most expensive on the list. For three years, I grabbed breakfast on the way to work or had it delivered to my office. Same thing for lunch… And you somehow justify spending $16 on a salad. If it was a really long day at work and I didn’t have any groceries, I’d order dinner to be delivered to my apartment. Or if I was out and about for events after work, I’d usually grab a bite with a friend. And I by no means was some food-ordering-fiend, it’s just the way most everyone operates in NY! When I think about the money I could have saved just by bringing lunch or making breakfast at home, it makes me cringe! Older and wiser, I suppose.

Since I’ve moved to Chicago, I’ve almost nixed my food ordering all together. To be honest, saving money hasn’t been the motivation, the delivery times are just so. much. longer. Ain’t nobody got time to wait for 60-75 minutes for dinner!

Since I’ve been making my coffee at home every morning, I’ve come to appreciate a morning routine. It sounds so silly, but when I go to bed at night, I look forward to drinking warm leon water, making a coffee, and cooking myself a little something for breakfast. Now that I’ve gotten myself into a routine, it actually makes traveling a little bit harder. It’s not as easy to start the day when I’m not in my own kitchen, and I really never thought I would be like that.

Let’s take it step by step — First thing when I wake up, I take a minute to jot down a few things in my 5 Minute Journal. (A little bit more on that here!) When I’m up and out of my bedroom (with the bed made!), I head straight to the kitchen and grab a mug. Before I make my coffee, I insist on drinking a cup of warm lemon water. I’d read about it all over the internet and decided to give it a go once I moved to Chicago earlier this summer. After squeezing my lemons by hand and getting lemon juice all over my kitchen for a few weeks, I finally got a citrus squeezer. It’s honestly my most used kitchen utensil at this point, highly recommend if you get on the lemon water bandwagon. Now, what’s all of the hype with warm lemon water? I’ve read that it helps digestion, rids the body of toxins, helps to maintain your immune system, balances your body’s pH levels, help relieve inflammation, and more. Wow, that’s a tall order, am I right? I can’t say for certain if drinking warm lemon water has done any of those things, but when I start my morning with it, I generally feel healthier and it starts my day off on the right track. And with all of those positive health claims, why not?! (You can check out these articles for some more info if you’re interested… one, two, three, four, five.) 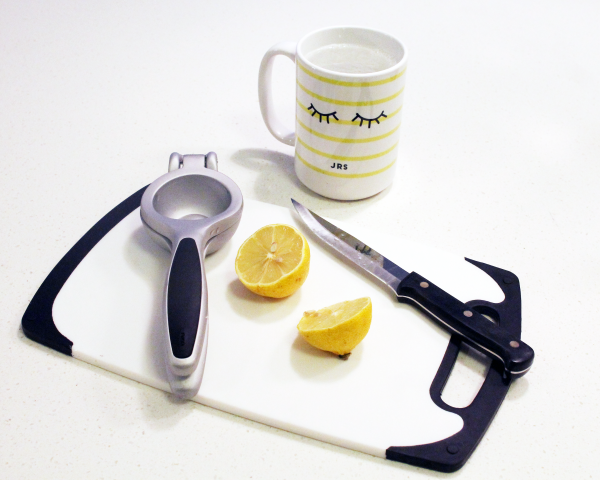 I microwave a mug of tap water for 30 seconds and then squeeze one half of a large lemon into the mug. If it’s a small lemon, I’ll use the whole thing. I then put the squeezed lemon in a large mason jar, fill it with ice and water, and keep it in the refrigerator for easy drinking all day long. If I’m feeling ambitious, and usually more so in the summer months, I’ll also add some sliced strawberries. It tastes like strawberry lemonade and ensures that I drink enough water throughout the day!

Drinking lemon water actually makes me feel a lot more awake, but I just generally love the taste of coffee. Next up in the routine, I make a cup of Nespresso. You can read more about that here!

After I’ve had my beverages (I usually try to chug a bottle of water, too. Gotta start the day on a hydrated note!), I make a little something for breakfast. If you haven’t already noticed, I’m a creature of habit and generally stick to a few great options that I have down to a science.

I’m all about the eggs in the AM — eggs with spinach, green peppers, and feta cheese is a favorite. (Add avocado on top for an extra treat!) I’ll also sometimes splurge and just go with a little bit of cheddar cheese in my scrambled eggs. Smashed avocado on wheat toast or a whole-grain english muffin is another go-to. If I’m in a hurry though (which is more often than not), I’ll opt for 2 hardboiled eggs and yoghurt.

If you live in Chicago, there’s no way you’ve gone without seeing a noosa yoghurt sign throughout the city. I had seen a few advertisements and had spotted noosa yoghurt at the grocery store, but I hadn’t gotten around to trying the yoghurt until I was invited to a brunch with the brand in early October. And to say I’ve been hooked ever since would be an absolute understatement!

noosa yoghurt is a unique combination of sweet and tart taste plus a thick, velvety texture unlike any other yoghurt I’ve tasted! It comes from an authentic family recipe and is made with whole milk, fresh fruit purees and a touch of honey on a family farm in Colorado. I actually got to talk to the co-founder Koel Thomas and hear about her story of discovering the yoghurt in Australia, seeking out the recipe, and bringing it to the United States. So cool! I love hearing stories of how businesses and brands came about, especially by women. #girlboss

Lemon is one of my favorite flavors to eat in the morning because it’s so incredibly refreshing. (And pairs well after I’ve drank a mug of lemon water.) I tend to stick to the fruity flavors for breakfast. Typically, I’m not much of a cherry fan, but I love the tart cherry flavor. Something about the tart cherry mixed with the creamy yogurt is just too good… Almost like a cheesecake! Blueberry and raspberry are also fabulous. 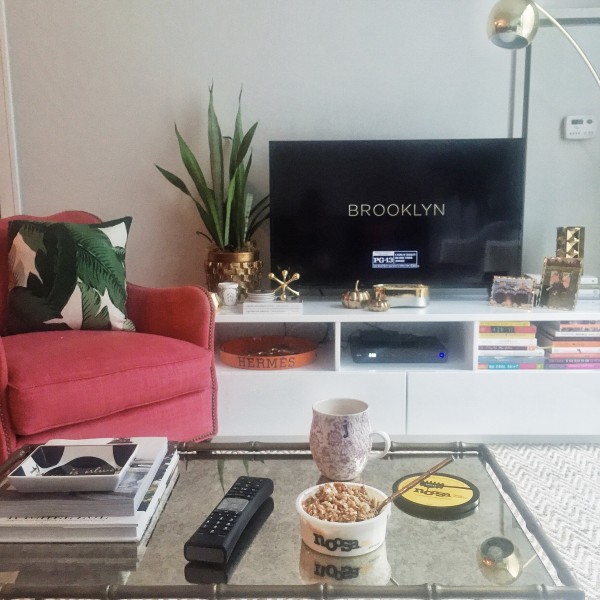 My yoghurt snacking doesn’t end in the AM, though. While I don’t condone late night eating for the waistline (but I’m guilty of it almost every night I’m up burning the midnight oil), the coconut flavor is such a great midnight snack! It’s so thick and luxurious that it kind of reminds me of ice cream, but with way less guilt. One of my favorite afternoon snacks is adding some Honey Almond Flax cereal to the honey flavored yoghurt. I honestly haven’t tried a flavor that I have disliked. They’re all so tasty! (You can peep all of the flavors here.)

noosa yoghurt comes in a wide cup so the eating possibilities are pretty much endless… I feel like it would be the perfect fruit dip for strawberries, bananas, etc. When I was speaking with Koel, I asked if she stirred the yoghurt before she ate it. Nope, everyone at noosa doesn’t stir. That way each and every bit is a little bit different… the honey flavor of the yogurt, the puree, etc. 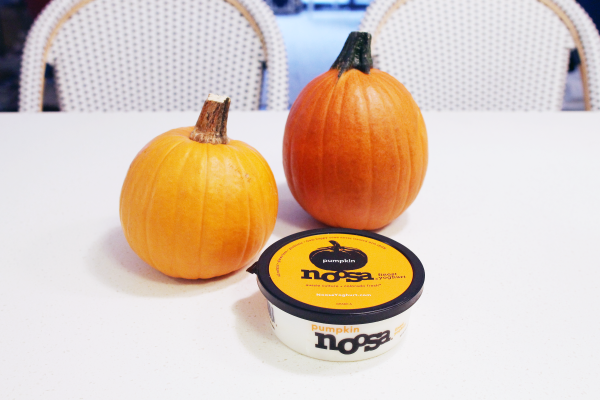 Before I could find the limited-edition pumpkin flavor at a grocery store near me, I decided to make my own little fall-flavored yoghurt concoction! I went with the vanilla bean flavor as my base and O-M-G. While I was putting it together and licked the spoon (as one does), I think I let out a little gasp. I was expecting the vanilla bean to be kind of bland, but it’s hands down my favorite flavor. No questions asked! 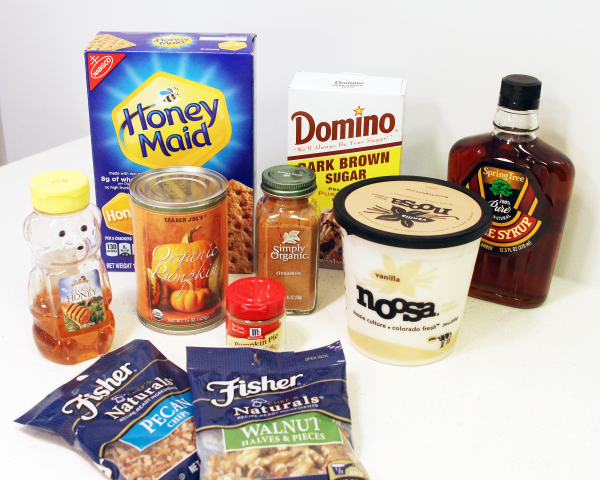 I kept moving forward with creating my little fall-flavored recipe, but I wanted to stop right there and eat the container by itself. Here’s what I came up with for a breakfast (or snack!) that’s a little bit more luxurious…

Ingredients:
noosa yoghurt
pumpkin puree
cinnamon & pumpkin pie spice
graham crackers
maple syrup or honey
brown sugar
pecans or walnuts or both!
*Keep in mind, everything is optional based on your tastes! 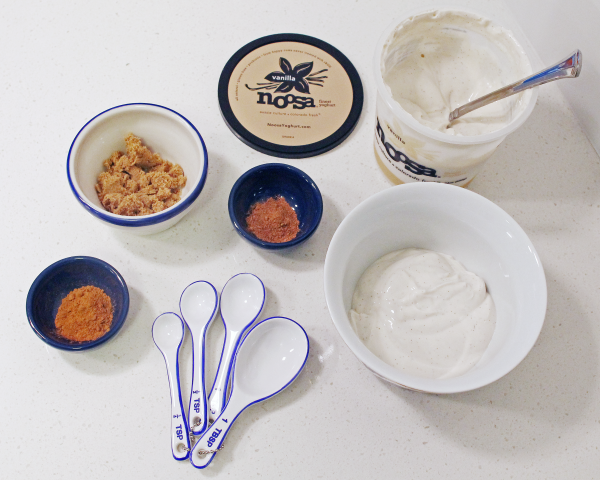 To start, I mixed cinnamon, pumpkin pie spice, and a touch of brown sugar into the vanilla bean noosa yoghurt. The brown sugar is definitely optional, the yoghurt is sweet on it’s own! 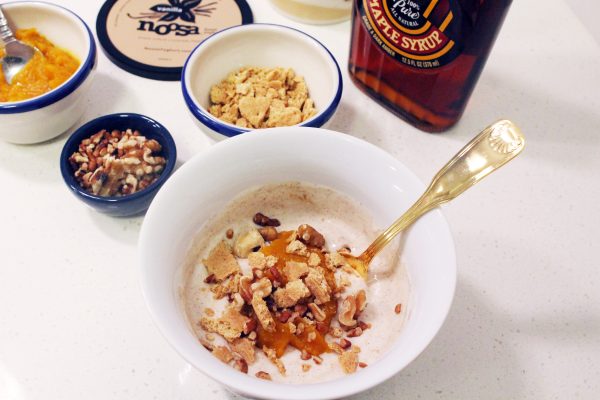 From there, I crushed up half of a graham cracker, added a dollop of pumpkin puree, and topped it with chopped walnuts and pecans. 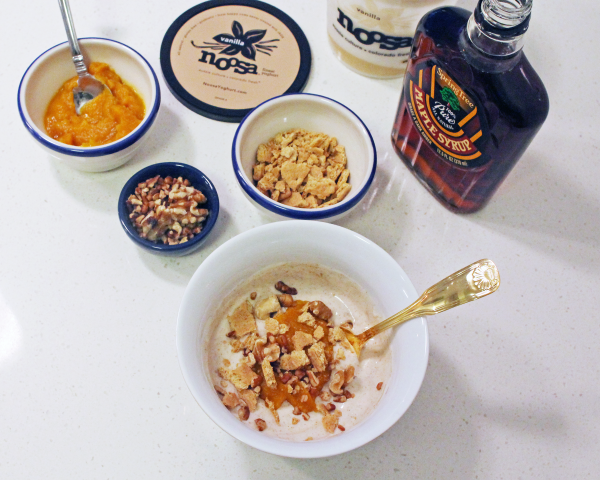 From there, drizzle a bit of honey, agave or maple syrup on the top and you’re all set! I kept graham crackers and chopped nuts nearby in case I wanted a little bit more of a crunch.

Do you have a morning routine that gets you up and excited to start the day? I’d love to hear! I’m also a big fan of morning walks, which I talked about here. I find it so interesting what people do in the mornings. Check out this article if you haven’t read it already!

Created in partnership with noosa yoghurt