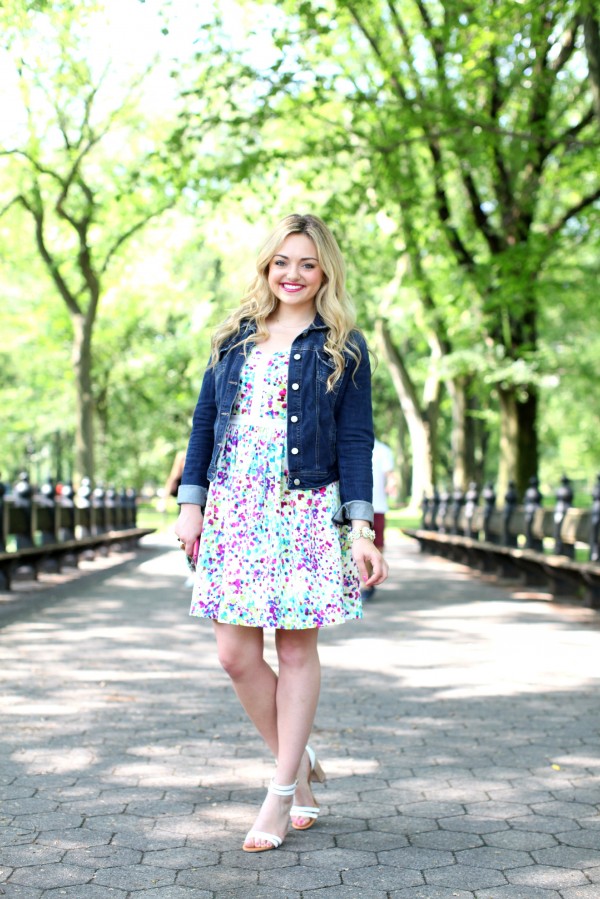 I talked about versatile dresses earlier this week (this post) and today I’m back with another! I’m in love with the print and the fit of this dress. It’s perfect for almost any occasion — brunch, a picnic in the park, work (with a jacket), going out for an alfresco dinner, a get-together with the girls, and any type of “garden party” theme, too. 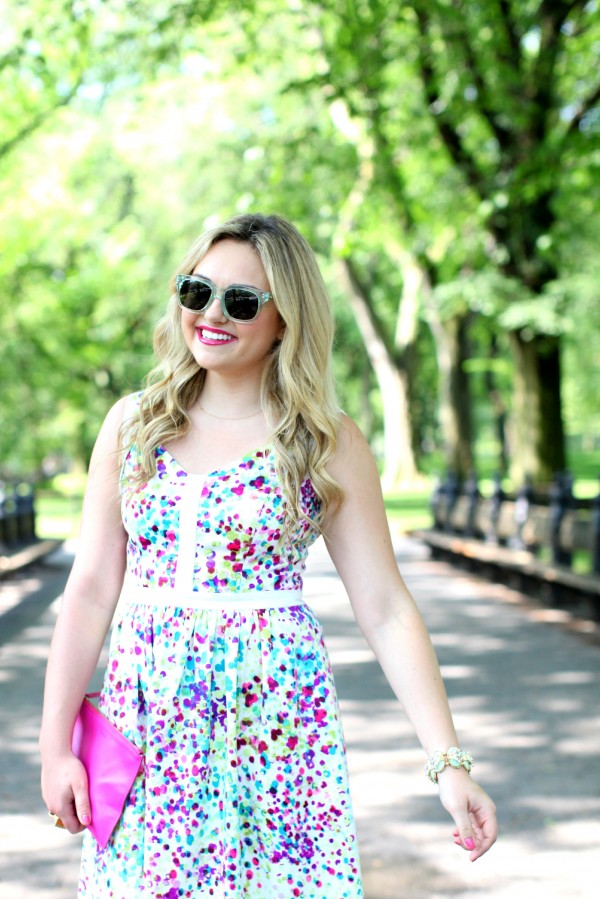 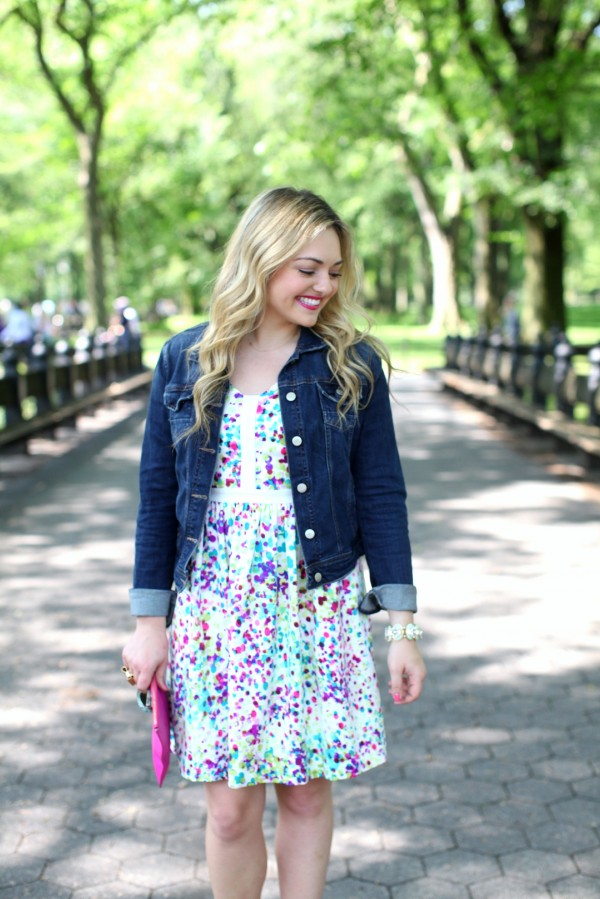 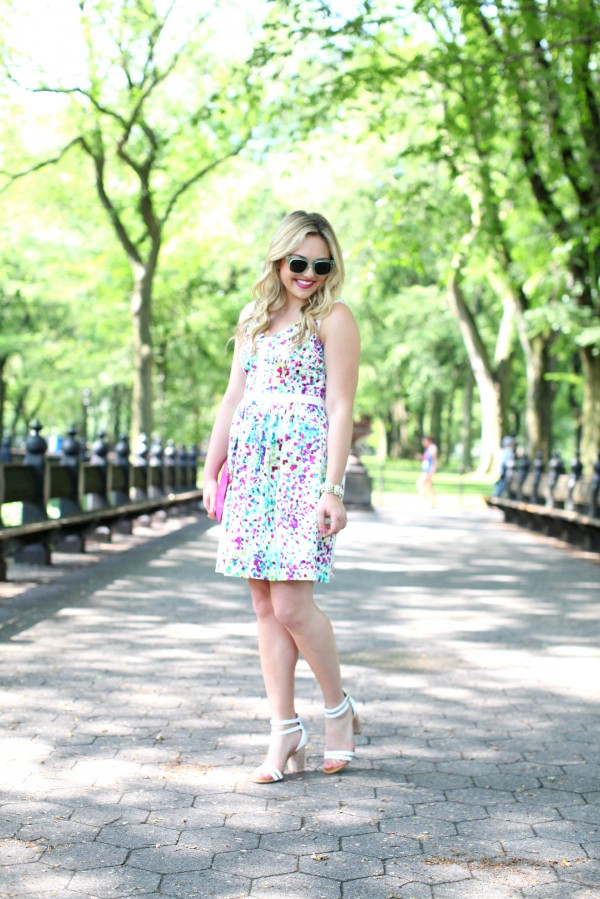 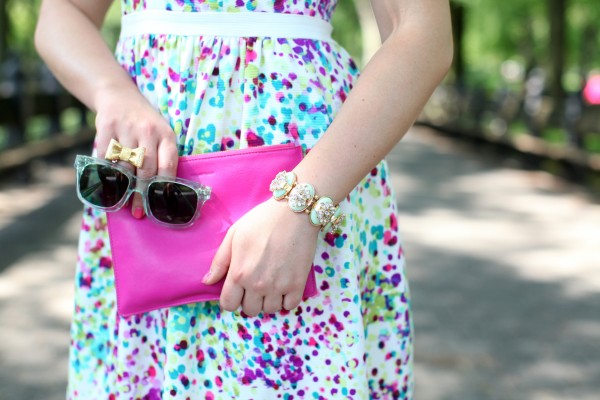 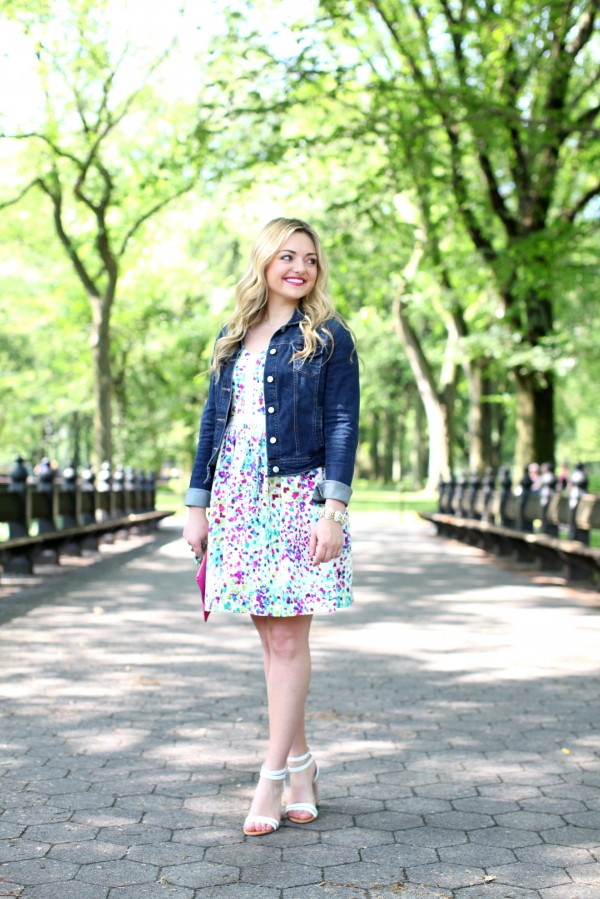 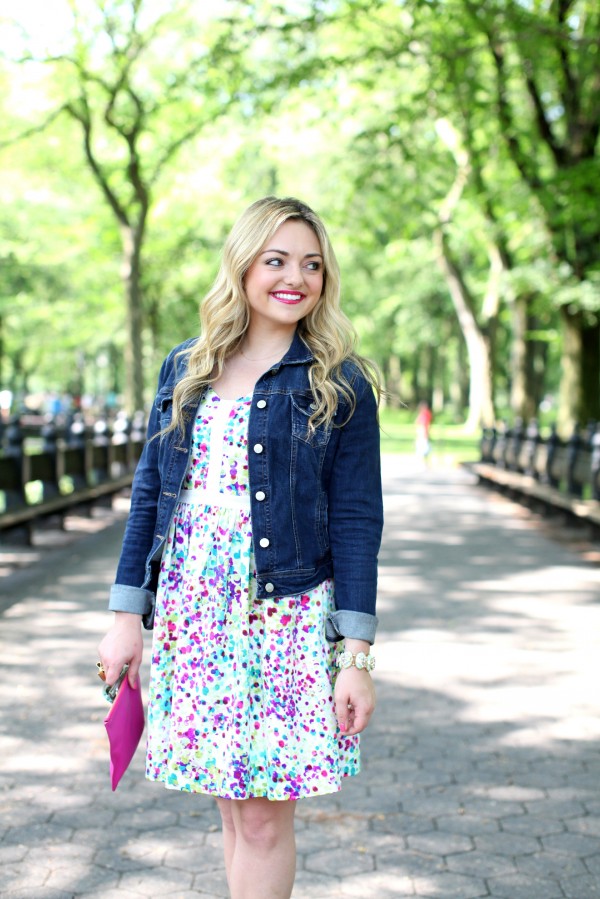 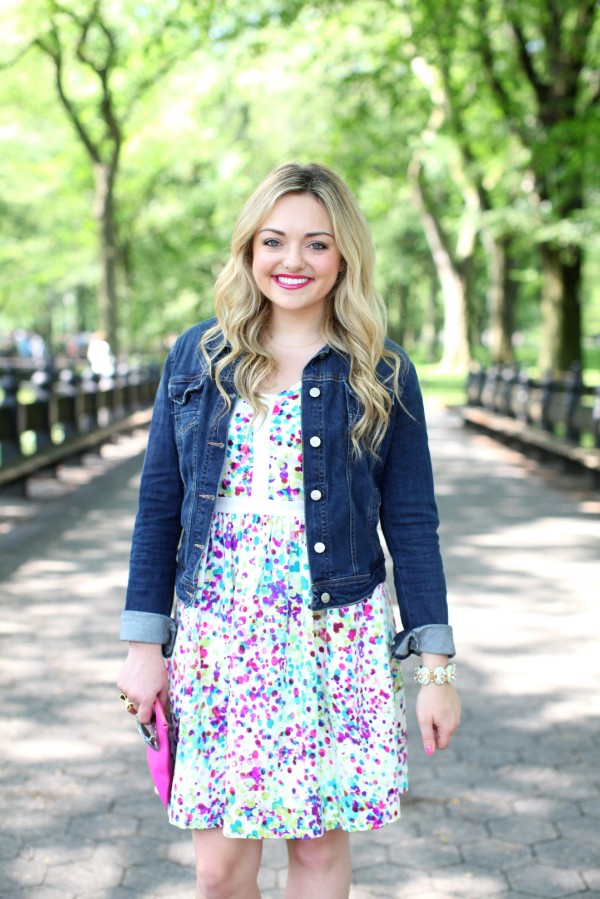 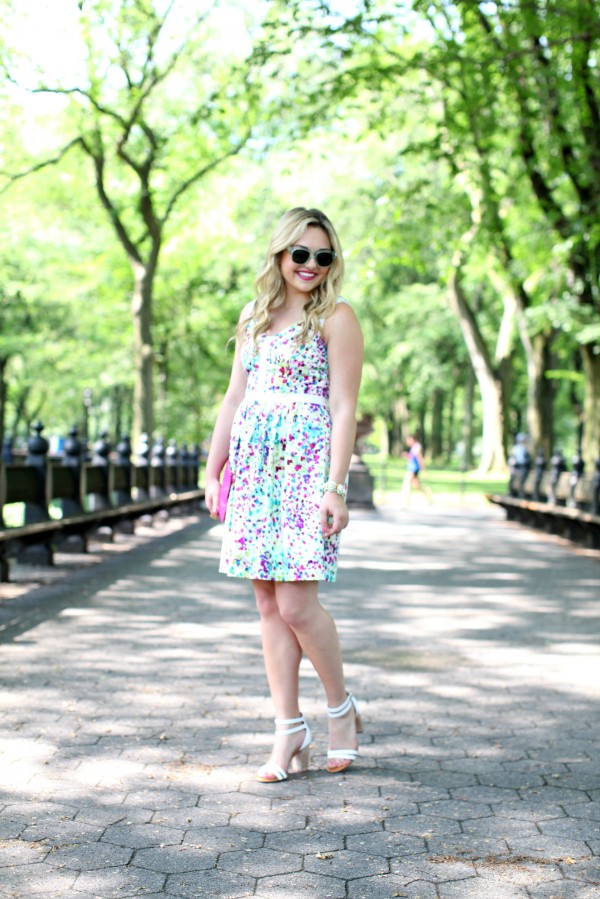 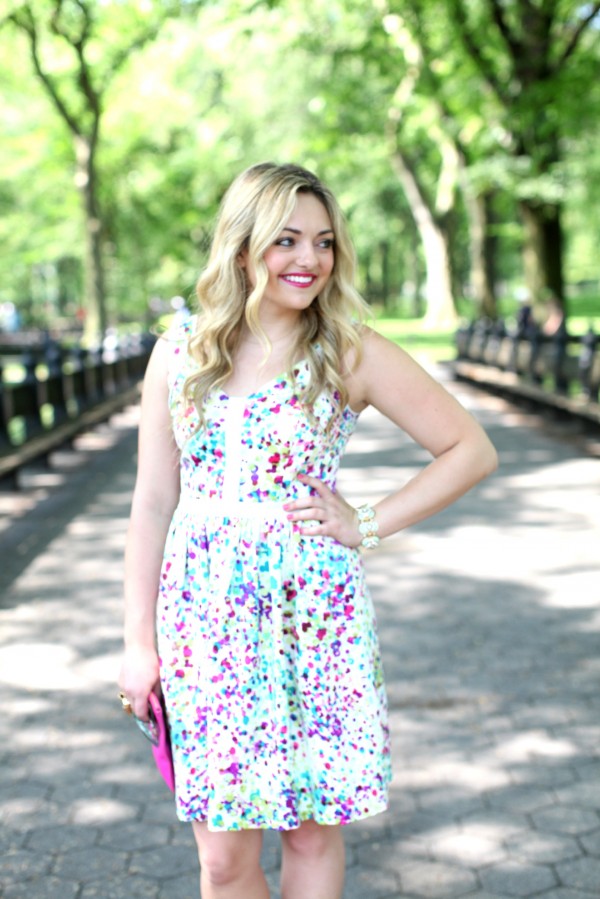 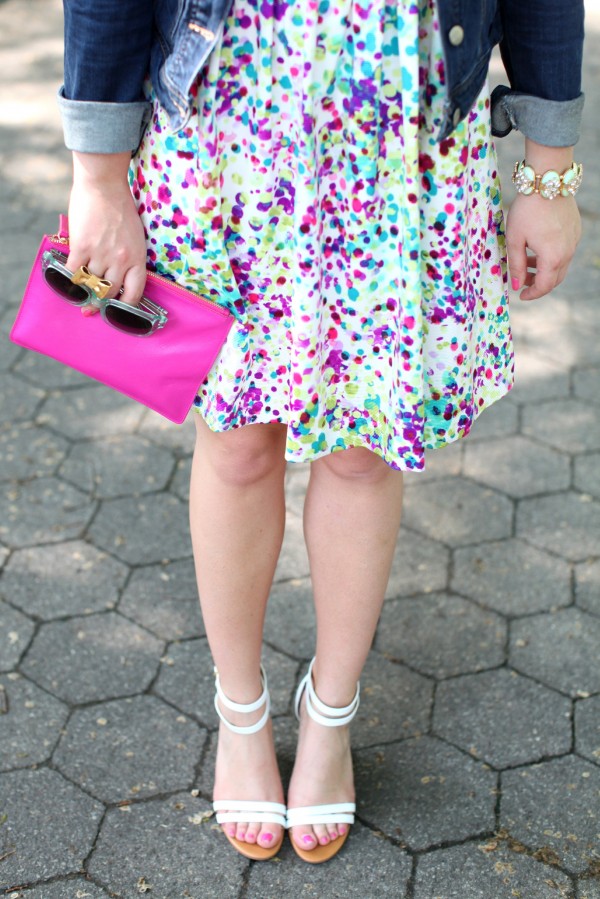 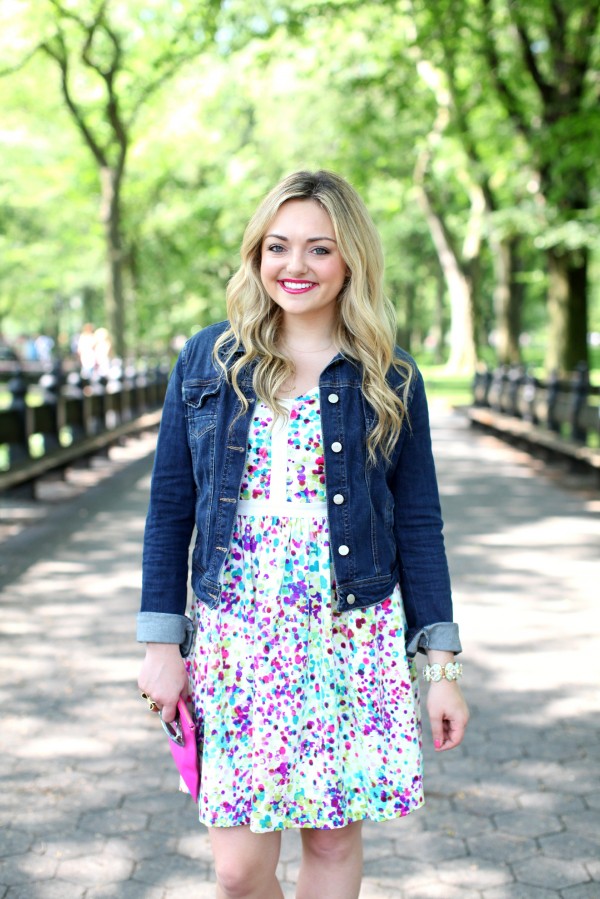 I’ve been meaning to get this weekend recap post up for about a week now, but this week was insane. It was jam-packed at work and I was so exhausted by the time that I got home, that I just went straight to bed. In fact, I slept in my clothes twice this week because I was simply too tired to get ready for bed. I also had food poisoning on Wednesday afternoon/night which was just awful and only added to my exhaustion. This weekend I’m planning on doing a whole lot of NOTHING. I wanted to sleep in today, but of course I was up at 7am even though my schedule is completely clear today. Figures, right?

Last weekend, however, was the complete opposite. I filled my schedule with so many fun adventures and activities and it was simply amazing. A weekend full of lots and lots of summertime bliss!

I kicked off the weekend a day early, which may have had something to do with it. I had dinner at Bryant Park Grill on Thursday night followed by a fun night of drinks and good company. I woke up early on Friday to have a productive morning before heading to Southampton with C.Wonder. (More on that to come!) Productive early mornings are seriously underrated! (PS: C.Wonder is having the most amazing sale right now.. You have to check it out!)

Ever since I made my Summer Bucket List, I’ve been making a conscious effort to make sure I’m constantly doing something and making plans! It’s hard to believe that it’s almost July, isn’t it? Time is flying by so I’m trying to make sure I cross off a good portion of the activities I wanted to do! (I’m crossing things off my list as I go, so be sure to check out my progress here!)

I planned a little picnic in the park for a few of my friends on Saturday morning and it was so fun! Hanging out in Central Park on a bed of Turkish Towels with some seriously amazing company (Lauren, Mackenzie, & Hallie) was the best start to the day. We took lots and lots of pictures at the picnic so stay tuned for a full update about that!

I’ve been making it a point to make it up to Central Park more often. I’ve gone a few weekends in a row, which is kind of impressive for me. I live on the Lower East Side of Manhattan so the park is nowhere near my apartment. Before the LES, I lived in the East Village just a few blocks away from where I’m at now. Since I’ve never lived that close, I sadly don’t make the trip up there that often. I’m trying to utilize it more this summer and I just can’t get over how amazing it is that we have this vast park, full of trees, grass, ponds, paths, birds, statues, and breath-taking views, in the middle of this crazy bustling city.

Saturday afternoon I may or may not have locked myself out of my apartment AGAIN. #EpicFail I was running out to grab an iced coffee and forgot my keys inside but hey, at least this time I was fully clothed. And this time it only cost $100 since it wasn’t in the middle of the night and he didn’t have to replace the cylinder. Isn’t it kind of creepy though how easily someone can just break into your apartment? A bit unsettling.

Any who, back to weekend plans. On Sunday, I had brunch at The Dutch with Kelly and her husband Mitch. Kelly and I met last summer at a few blogging events and I’ve really enjoyed getting to know her over the last year! She is seriously the sweetest! Her and her husband (who is also a U of I grad from Central IL.. small world!) are moving to Chicago next week, which is so bittersweet. I’m sad I won’t get to see her in the city as often, but I just know that they are going to love Chicago. They’re actually living in my old neighborhood, Lincoln Park!

After brunch, we headed to Courtney‘s place to mix & mingle with a few bloggers. She was the hostess with the most-est… The party was Macarons & Mimosas themed and the decor was oh-so-cute. (Read Courtney’s recap here!) I fell in love with Courtney’s apartment, neighborhood, and her adorable french bulldog named Waffles. OMG he is just the cutest thing. I actually sent a picture of him and me to my mom and I think I had her convinced (at least for a minute or two) that I had finally gotten a frenchie of my own. (If you’re new around here, I’m obsessed with French Bulldogs. Literally OBSESSED. I know they’re everywhere now, but I’ve been in love with them since my now ex-boyfriend got one back in 2008. I may or may not already have an Instagram for my future frenchie, Griffin.)

Have a fabulous weekend! xo