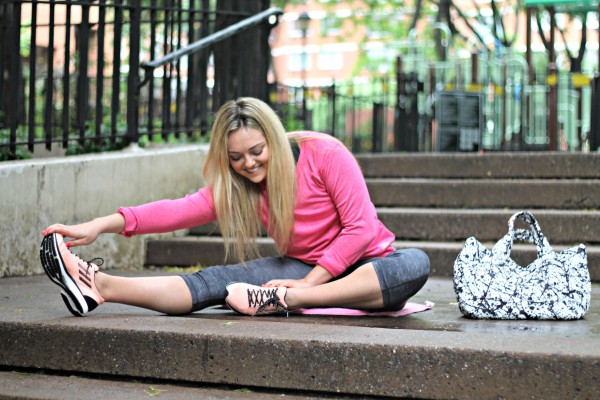 After the winter we had, I’ve made it a point to be outside as much as possible this summer! I’m sure I’ll be singing to a different tune when the major heat & humidity sinks in in August (#GiveMeThatAC), but until then… alfresco! 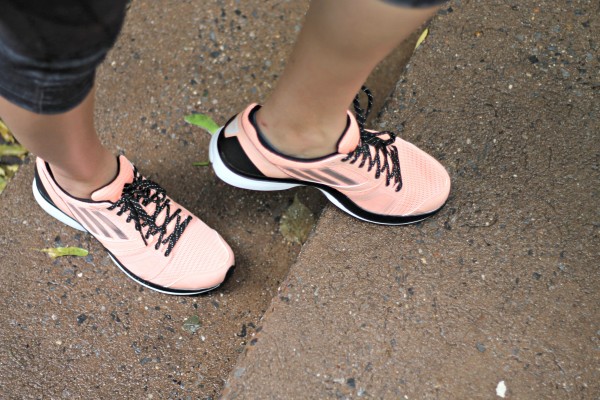 Other than eating any and every meal outside, I’ve been trying to fit in more outdoor exercise, too. I’ve told you guys about my chronic shin splints before, but if you’re new in these parts (hi!), here’s a long story short: I can’t run at all. It’s a major bummer, but I’ve luckily found lots of low-impact exercises I love. Unfortunately, majority of them are indoors. (Check those out here!) I so badly wish I could go for a jog, but it’s just not an option. So while running may be your summer exercise of choice (#jealous), here are a few ways I’m squeezing in some exercise outside this season…

1. Biking. I mentioned it a few weeks ago, but I’ve been really into biking lately. From taking CitiBikes instead of the subway or a cab to renting bikes and doing the Central Park loop, I’m all about being on 2 wheels! Most of the time, it’s faster than walking or public trans, plus you get a little breeze as you’re cruising along. 🙂

If biking isn’t an option (and I’m not in a huge rush), I’ve been trying to walk instead of take any mode of transportation. Saving money and burning calories… It’s a win, win!

2. Utilizing the Waterfronts. One of the things I regret about my time living in Chicago is not taking advantage of the gorgeous lakefront. I lived just a few blocks away from one of the most insane water/skyline views and totally took it for granted. Since I don’t run and was too scared to bike in the city, the only time I saw the lake was when I was driving on Lake Shore Drive. Pretty sad, right?

There are so many waterfronts in New York and I’m making it a point to get out and explore this summer! Both the Hudson and the East Rivers have paths that span for miles. There are gorgeous views of the city skyline, Queens, Brooklyn, New Jersey, the Statue of Liberty, and more. Whether it’s by bike or taking a stroll in my sneakers, it doesn’t feel like exercise when you’ve got killer scenery.

My uncle was in town this past weekend and we walked from my apartment on the Lower East Side down to the South Street Seaport via the East River Path. It took about an hour, but we probably walked about 3 miles. Talking & walking is one of the best ways to catch up with someone… The miles go by a lot faster when you’ve got good company!

Side Note: Is it just me or does your calendar fill up SO much faster in the summer?! Often times it feels nearly impossible to keep up with friends, network and attend events, find the time to work out, etc. Next time you want to catch up with someone, maybe suggest smoothies and a long walk instead of drinks. #TwoBirdsOneStone Plus, it’s probably a lot easier than finding an outdoor bar with an open table. 😉

3. Park It. Beyond the basic walking, running, and biking in the park, I’ve seen quite a few group workouts happening in various parks across the city. While I haven’t tried any of these classes yet, I’m adding it to my Summer Bucket List. From yoga to Pilates to volleyball to circuit training to bootcamp, the NYC parks seem to have it all. (Website here, if you’re interested!)

Does your town have any outdoor fitness classes? If so, which ones have you loved? If not, what are some of your favorite ways to stay in shape outdoors during the warmer months? Would love to hear! 🙂 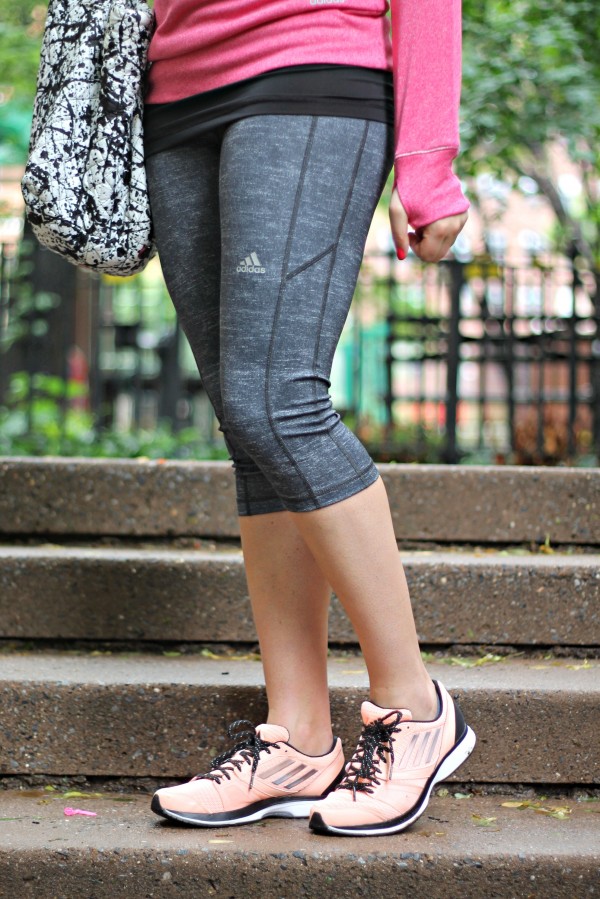 Now on to the good stuff.. The clothes. 😉

I’ve traded in my longer adidas tights for the Techfit capris for summer! I don’t mind wearing my longer tights indoors still, but most days it’s been too hot for those extra few inches of material.

I’ve worn this adidas Techfit tank a few times within the last week or two and I really like it. It’s nice and fitted, but has lots of breathability! It has a mesh upper back, a cut-out in the back, and is made with adidas Climacool technology. In other words, this tank was made for outdoor workouts! Plus, I absolutely love how the back cut out allows for a little pop of color from your sports bra!

I think the coolest thing (no pun intended) about the Techfit Tank and Techfit Tights is actually that they have UPF 50+ UV protection built right in. That doesn’t mean you can skimp on your sunscreen, but at least you won’t have to worry about getting burned through your clothes!

Oh, and how awesome are these shoes?! I custom designed these adizero sneakers on the adidas site! They are mesh on the top so they’re perfect for outdoor workouts. Plus, they are super cushy and comfortable! Not to mention, they look pretty cool, too. 😉 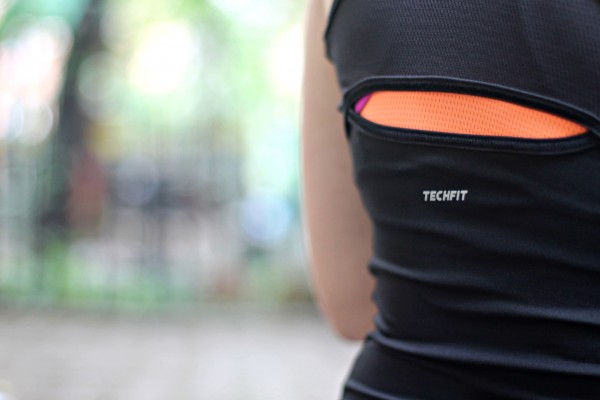 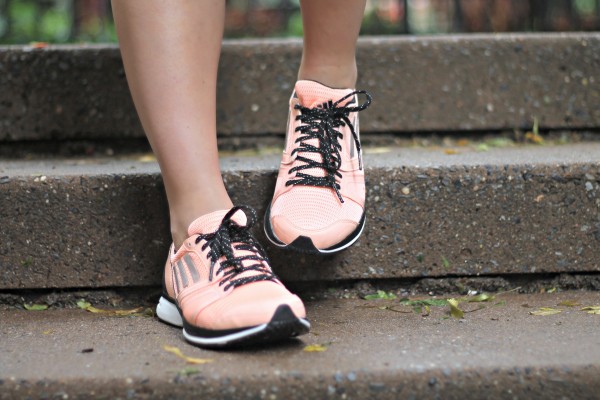 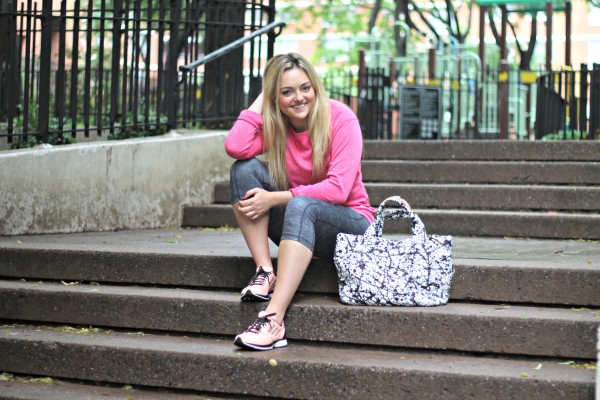 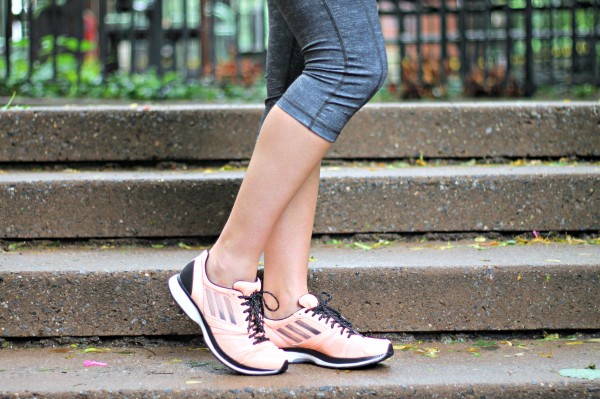 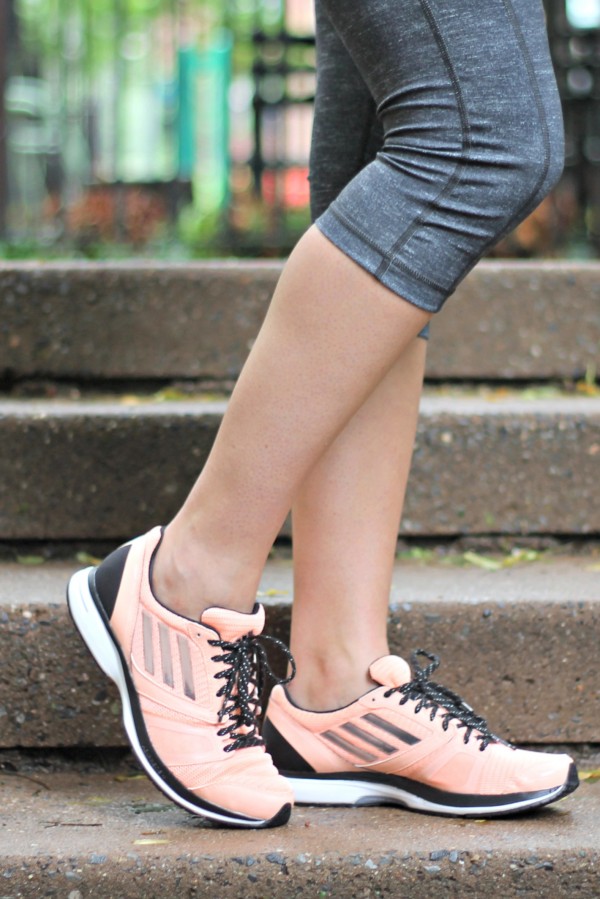 adidas Women designs innovative performance products to help women commit to their best self and conquer their fitness goals. We inspire women to look and feel their best, so kick-start your workout today with new styles from @adidasWomen. It’s time to #committomore. www.adidas.com/women | Disclosure: Compensation was provided by adidas via Glam Media. As always, all opinions are my own! Thanks for supporting the brands and collaborations that make Bows & Sequins possible!